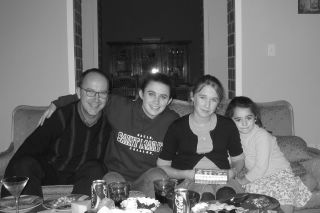 Not much really. I mean, we're obviously eating dinner every night and I'm packing lunches every day. But it's been crazy busy and my chances to experiment have been few. We've been to several dinner parties and birthday parties - so lots of eating but very little of it prepared by me. It's been a nice break.

Last night we had a mushroom risotto with oven roasted brussels sprouts. I made the risotto with some leftovers from a dish I make called Portobello Mushroom Bake. I made a basic risotto and then stirred in the leftover mushrooms, some nutritional yeast and some vegan parmesan. Some salt and pepper. It was hard to believe it was a dairy free risotto! The brussels sprouts were roasted in a very hot oven in some margarine (the Earth Balance, non-hydrogenated kind...) and then tossed with fresh Meyer lemon (from my yard) and capers. It is a much maligned vegetable that really shines prepared this way.


Preheat oven to 425. In a blender or food processor, blend the almonds until powdered. Add oil, Braggs, water, vinegar, garlic, rosemary and oregano and blend until well combined. In a large baking dish, place the mushrooms upside down and top with onions. Pour sauce over and bake for about 45 minutes. Serve over rice. Friends I've given this recipe to like to double the amount of sauce - it's really good.

The evening was topped off with a new episode of ABC's "Wife Swap." I swear it's like a car accident you just can't help but watch. Last night a meditating vegetarian mom from California switched with a neatnik New Jersey mom who cooked lots of meat-filled Italian meals. I've got to hand it to the veg mom - she handled the meat cooking much better than I would have. But like she said - the other mom prepared this food with love and she was going to do the same. And then she got reamed by the MIL for not keeping the kitchen clean while she cooked (I would have wanted to smack her upside the head with one of those pork chops). Low brow television just doesn't get any better than this.

So it appears that you have completed your mission and have become one with the mushroom...lol...It sounds so good...wish hubby would give it a try...Josh would love it though

Nice Blog !
I also have a car kit
site

It offers free tips on lemon laws for your state. You should check it out if you get a chance :-)

After spending considerable time searching for lemon law car, I would like to say thanks for the post. A lemon law car isn't always easy to find quality information for. Thanks again.