Last night we had pizza - pizzas that were at first viewed with skepticism by the kids but quickly consumed once they tried them. Pizza for vegetarians is easy - there are a ton of toppings that don't have meat. But vegan pizza is a little more difficult. While I'm not officially a vegan, my daughter is, so typically our household is a vegan one. When she first became vegan I tried all kinds of recipes for pizzas trying to find something that would replicate a regular cheese pizza. She'd never been a big pizza fan so the most adventurous she'd ever gotten was a regular pizza with tomato sauce and cheese. Occasionally some basil. What I've discovered since trying all these new pizzas is that her willingness to expand her horizons has increased a lot. Last night we had two different pizzas - one had caramelized onions, grilled pears (I used some balsamic vinegar to deglaze the pan), homemade "faux feta" and vegan mozzarella cheese. One of our favorite restaurants in San Francisco is Scala's Bistro and they have a pizza on the menu very much like this one. Actually I've seen it on the menu a lot of places but this is the first place I ever tried it. The homemade version was quite a success: 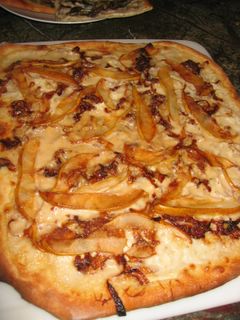 The other pizza had sauteed mushrooms (cooked until they were golden then splashed with some balsamic vinegar, salt and pepper), sliced green olives and some veggie sausage that had been cooked and then crumbled. Instead of a red sauce I used a garden-herb salad dressing on both of them. Years ago I'd tried finding out what the "creamy garlic sauce" was that so many pizza restaurants use on their veggie pizzas and read somewhere that they use ranch dressing. It makes a nice change of pace from the usual pizza sauce. I use to always make my own pizza dough but since Trader Joe's now sells fresh pizza dough for 99 cents I take the easy way out and use theirs. I buy just one package though and make two pizzas with very thin crust. The vegan mozzarella I use is by a company called Follow Your Heart. There are many soy cheeses on the market but most of them contain casein which is a dairy product so they aren't vegan. I get people telling me all the time "but would your daughter know if you used something with an animal product in it?" and of course, I don't believe she would. But she is trusting me to help her stick to being vegan and I wouldn't feel very good about knowingly serving her something that wasn't vegan. I can well remember as a child eating something and then afterwards having someone tell me "did you like that? It had [insert name of something I didn't like here] in it. And you ate it. See, you must like it." All that does is make you suspicious, not grateful. Teenagers are suspicious enough.

I get people telling me all the time "but would your daughter know if you used something with an animal product in it?"


You are so much nicer than me. I would have to slap the person who said that. Yes, by all means, let's lie to and undermine our children as much as we can. that way they can form healthy relationships. Geez!