The better part of my Sunday was spent in a basement rehearsal space at Davies Symphony Hall listening to a lot of bass players (including my daughter). Some very young (and not so great) all the way up to an incredibly talented guy named Donovan Stokes. He is inspiring. When we got out of the performance it was pouring and traffic was at a standstill. It turns out we were hitting the tail end of the San Francisco St. Patrick's parade. argh.

At home, finally, I made mushroom risotto, oven roasted asparagus, applesauce and garlic bread. The risotto is simple and good. I marinated 4 (smallish) portobello mushroom caps (diced) in a mixture of olive oil, Braggs, balsamic vinegar, some nutritional yeast and garlic. I sauteed these with one chopped onion in some olive oil. Here is a picture of the mushrooms and onions: 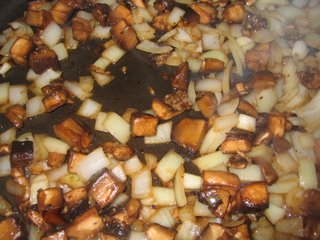 Once the onions were translucent I added 2 1/2 cups arborio rice, stirred to coat the rice then added 1/3 cup white wine. From there it was slowly adding 32 ounces of mushroom broth and 32 ounces of vegetable broth, stirring all the while until the liquid was absorbed. Then I stirred in about 1/4 cup nutritional yeast, salt and pepper. Everyone in the house loves this dish.

Here's a shot of the completed risotto with the roasted asparagus 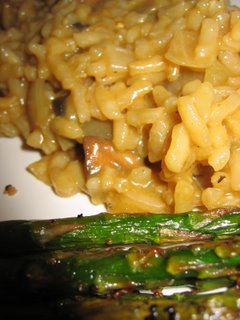 All in all a succesful meal!
Posted by Guinnah at 3:51 PM

mmm... reminds me of italy. our last night in fagagna, we had a home cooked meal of risotto and asparagus.