First and foremost I have to point out that we had an unexpected but very welcome visitor today - the sun. It has rained almost every day for the last month and a half. It is supposed to rain tomorrow. But today it was sunny and WARM. A sign of things to come I hope. 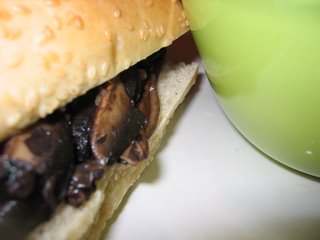 Tonight we had Portabella French Dip sandwiches. I tweaked the recipe a bit (we've made these several times). I make half the amount of au jus and use a lot more mushrooms. I also don't bother with the margarine and garlic on the bread - I just toast it a bit in the oven. Fantastic foods makes a mushroom onion soup mix that works well for this recipe. I'm sure you could just use a mushroom broth with some seasoning and it would work as well.

We also had a dish I make based on a traditional Jewish dish called tzimmes. I first had this from Whole Foods - it just looked good to me but I didn't really know what it was. So I just ate it cold. When I tried to find a recipe for it I learned that it is usually stewed with meat (the Whole Foods version was vegan). So I make something that is similar but I serve it as a cold or room temperature dish. 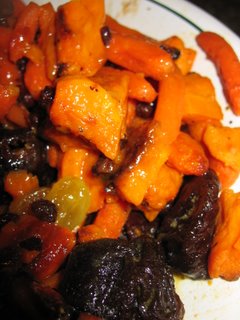 Simmer dried fruits in orange juice until they soften a little then remove them with a slotted spoon. Continue to simmer the orange juice until it is reduced by half. Add a splash or two of champagne vinegar and some salt and pepper. Mix fruit with the roasted vegetable and toss with the dressing. It tastes best if it can sit for a little while. 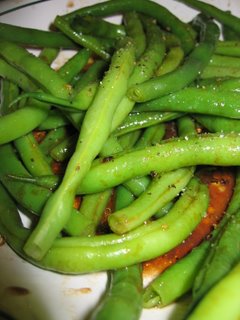 We also had some lightly steamed green beans tossed with some balsamic vinaigrette and some mango. I really love green beans - just steamed a bit and drizzled with lemon, salt and pepper they are so good. Growing up we always had beans that were boiled with bacon. Yuck! A few years ago I was at my brothers house and they brought in some beautiful green beans fresh picked from their garden - then I watched in horror as, yup, into the bacon water they went.

One more sign of spring - one of our fig trees: 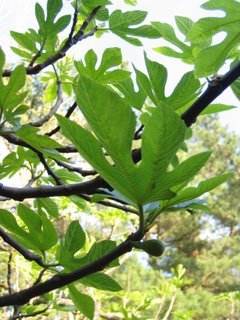 Yum, everything looks good! I really have to try the French dip. Thanks for the link and the tips!

Another meal that looks fantastic! I really want to make those french dips-yummy! One question though...do you have to use the Bragg's that the original recipe calls for? I don't have any of that.

Hi Kai - we really like these sandwiches - comfort food :-)

Julie - you could just use soy sauce - though I would go with a low sodium one. I hope you enjoy the sandwiches - it's a pretty forgiving recipe and I'm sure you could change/adapt as needed.