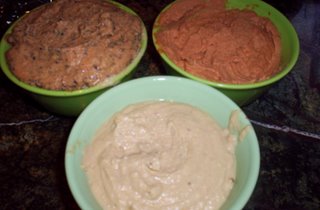 Tonight was one of those nights where I had a meal planned (more on that whole concept in a later post) and then found out it would just be me and one kid. There were leftover calzone fixings so I made some pizzas on a seeded baguette. We are having company on Friday night so I also made up some hummus to have tonight and on Friday.

I made my usual hummus:

Process it all in a food processor and add in the liquid from the beans to get the consistency that you like. Adust seasonings to taste.

I then took some of that and added some sun dried tomatoes. To another bowl I added chopped black olives, roasted garlic and cayenne. Hubby had meetings today and needed the camera so I used my daughter's camera. I'm so spoiled by the closeups that my camera takes!

The hummus turned out good - I got some complaints on the cayenne from H. I've got to toughen that kid up!
Posted by Guinnah at 11:02 PM

I do love hummus--what a great idea to mix it up with different kinds! I just bought some hummus at TJ's...but I forget how easy it is to make. Do you have any recipes to use up leftover hummus?