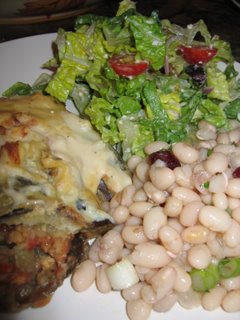 Tonight's dinner was moussaka - using the recipe from the Chicago Diner cookbook. I picked the book up at Whole Foods at least a year ago and I don't think I've tried anything from it. So to feel like less of an idiot for having purchased the book I decided to give something a try. The moussaka took awhile to make - there's the eggplant to cook, the filling to prepare and the bechamel. I made it in the morning when it's less overwhelming to clean all those pots and pans. Because we have our business at home we often do a lot of work at night - when the phones are quiet. So mornings are typically a good time for me to cook dinner - or at least do as much prep as possible.

We really liked the moussaka - it was rich tasting but not overwhelming. I believe the recipe called for 1/2 cup of oil in the bechamel - I used maybe 2 T. and the rest veggie broth. It worked fine. The filling was a mixture of tempeh, tomatoes, white beans, garlic and onion. 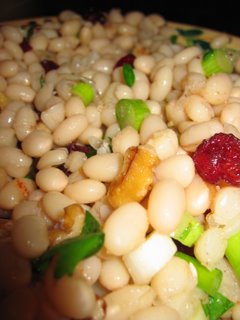 We had this with one of my favorite salads ever - I originally got the recipe from Paula Wolfert's Cooking of the Eastern Mediterranean cookbook - it's essentially white beans cooked until tender and then tossed with lots of lemon, some salt, pepper and aleppo pepper. Then some chopped parsley, walnuts, green onions and pomegranate. Since it's not pomegranate season I used dried cranberries. I love the beans with just the lemon, salt and pepper. So good. 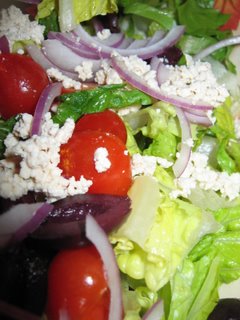 We also had a greek salad: chopped romaine, kalamata olives, grape tomatoes, thinly sliced red onion and tofu feta. The dressing I make for this is about 1/3 cup plain soy yogurt (Wildwood), 2 Tbs. red wine vinegar, pinch of granulated garlic, salt, pepper and oregano. This is one of our favorite salads in the summer - we make a meal out of it. When I want some "feta" for a salad I just take some extra firm tofu (not silken) and crumble it with a fork, sprinkle it with a little bit of nutritional yeast, salt and a drop or two of lemon juice.

This got approval from everyone - though H only liked the moussaka when she could dip bread in it. So I'm sure we'll make it again - someday.
Posted by Guinnah at 9:59 PM

Wow, that looks splendid and healthy. I am going to be going to Chicago for a few days next week and am going to go to the Chicago Diner. Anything you recommend i might want to try that you see in that book??!

What is the best way to make the tofu feta? I have seen different versions.

The Greek salad looks wonderful-- I can't wait to try it!

Hi Julie - the bean salad is a nice mix of flavors and textures - it's extra good when you can use pomegranates. We planted a pomegranate in the yard so hopefully by next year we'll have our own??

Hey Kleopatra - Have fun in Chicago! I'd like to try their "Diner Cutlets" or what they also refer to as their faux fish filets that they put in a sandwich. I never liked fish but I tend to like the tofu versions.

I've tried lots of tofu feta recipes but always end up with more than I can use. The best solution I've found for small amounts is smash it, put some nutritional yeast, salt (a lot) and lemon (tiny bit).