It's so hot - I'm not complaining, after all the whining I did about the rain. But somewhere in between would be nice. Oh well.

I had a dish planned for tonight that requires an hour in the oven. It's a favorite of ours with portobello mushrooms baked in a yummy sauce, served over rice. But no way was I going to have the oven on for that long, or make a pot of rice. So on to Plan B.

I took the mushrooms and marinated them in Soy Vay Chinese marinade for an hour or two. We haven't filled the propane tank for the outdoor grill so I cooked them indoors - but it only takes a few minutes so it wasn't too bad. I found some red quinoa in the pantry and cooked that up and after it cooled off I mixed it with some cucumbers, tomatoes, mint, lemon juice and balsamic vinegar. We also had some fresh asparagus that I served at room temperature with a fig and red wine vinegar. I prepared a huge platter of fruit - fresh pineapple, watermelon and mango. It was so perfect for a hot night like tonight. And because my kids don't think it's dinner without some kind of bread we had some french rolls prepared in my favorite way (a little Earth Balance margarine, a sprinkle of vegan parmesan, a sprinkle of Old Bay Seasoning and under the broiler for a couple of minutes). 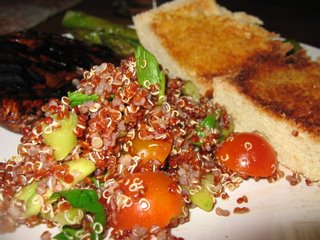 Last night was the last lacrosse game - H has been in a sport every season which means she has had daily practices since mid-August. I'm not sure she is going to know what to do with herself!
I took this picture of her at a tournament on Saturday: 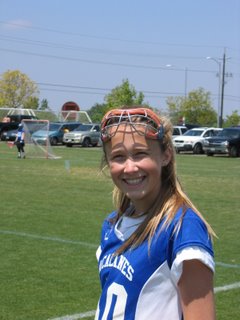 I always get so many comments about our diet - here's a kid with clear skin, energy to burn and a smile that lights up my life :-) I think she's doing okay!

Finally, we have a bottlebrush shrub that seems to be blooming before our eyes. The other day there was nothing and suddenly today, everytime I looked out the window, there seemed to be more red. So I took a picture and will try taking one of the same flower over the next few days (because I'm just odd that way) 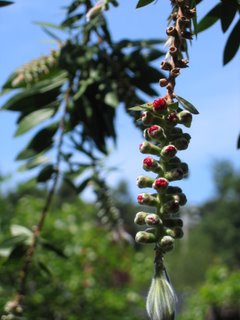 I think it's supposed to be a little bit cooler tomorrow. One can only hope!
Posted by Guinnah at 10:11 PM

SOY VAY! I have done the marinating of portobello 'shrooms with SV and it is SO good. That is one match made in heaven...

Your daughter is gorgeous... a testament to a good, healthy life. I have been a sportswriter for over 20 years (even have covered lacrosse!) and I have met only a handful of veg kids over the years and I only wish there were more like them!

I am looking forward to seeing how the bottlebrush grows. That's a great idea to document that. They get bushy FAST...

Yum! I love all the pictures of your plants, keep on taking 'em. :)

How long have you and your family been vegan?

Hey Kleopatra - I agree, the SV and mushrooms were just meant to be. Have you tried their wasabiyaki? It's great on noodles. That's so cool that you're a sportswriter - my brother was a sportscaster for years. I love sports - no the pros so much but college. Thanks for the compliment on my daughter - she is a wonderful girl. Did you see the veg athlete issue of VegNews? Very inspiring.

Hi Primary - the offical vegetarian declaration was in early 2002 - we ate very little meat, I never liked it, and it wasn't a difficult transition. My youngest decided a few months into it that she wanted to be vegan - a natural progression IMO. So at first her meals were vegan and we still had cheese. Then I decided what the heck - I'll just cook vegan. Because the most amazing thing happened when we quit eating dairy - my lifetime constant "allergies" disappeared. I still get hayfever but the rest of the year NOTHING. Same with my daughter - no more inhalers, pills etc. So there was never an official declaration just a switch over to only vegan cooking. I like the creativity it allows and as much as I used to love cheese I like how I feel now so much better!

One more thing, my older daughter is not vegetarian. When she's out of the house she orders what she wants but at home she eats what we eat. She is a great sport about it and is a very appreciative diner - I get lots of compliments from her :-)

When you think it's hot there, just remember ME & Leslie in scorching AZ!