I had a little technical difficulty trying to blog last night so I'll do a morning post instead. I usually blog after I've cleaned the kitchen and made the kids lunches for the next day. Last night we did an impromptu family movie night instead. We watched "High Fidelity" which is one of my favorite movies and has my personal trinity of People I Like to Watch (John Cusack, Bruce Springsteen - albeit briefly and Tim Robbins). Add in some hilarious Jack Black and what's not to like? 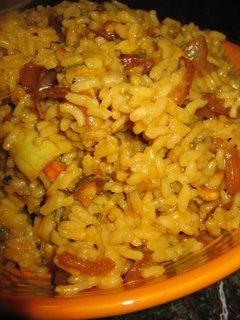 Back to the food. The risotto was made as follows:

2 1/2 cups arborio rice
olive oil
1/3 cup white wine
~40 ounces vegetable broth
2 onions (I used one red and one yellow because that's what I had) thinly sliced and caramelized in a saute pan
1 can artichoke hearts, drained and cut in half
1/2 cup pistachios (Trader Joes sells them already shelled)
1/4 cup nutritional yeast
salt and pepper

I had one pan going with the onions - I started them with a little oil and then kept adding broth to the pan, just a little bit, to keep them from sticking. They cooked probably half an hour over a very low flame. Toward the end I turned the heat up and added the artichoke hearts to warm them up a bit and get them a tiny bit browned. I then added a splash of white wine to deglaze the pan and took it off the heat until the rice was ready.

In a large saute pan heat a small amount of olive oil, add rice and stir until it is all coated. Add the wine and stir until the wine is absorbed. Then slowly add broth, one cup at a time, stirring until it is absorbed. When the rice is done (after about 20 minutes or so), stir in the nutritional yeast and season with salt and pepper to taste. Stir in the onions and artichoke hearts and then the pistachios.

We also had caesar salad made with the tahini vinaigrette I posted about recently. 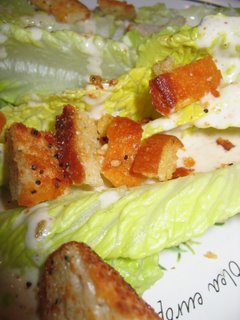 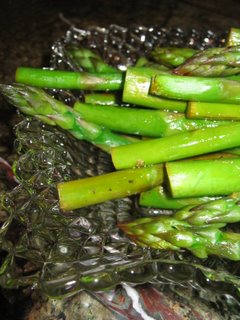 The asparagus probably isn't photo-worthy but I bought a great little dish at a thrift store the other day and it was the perfect size and shape for serving the asparagus. I love finding serving dishes, pitchers, old silver etc at thrift stores and antique stores. I'm careful about what I use them for because of lead etc. but I always find a way to use them somehow!
Posted by Guinnah at 8:17 AM

This would be the ultimate comfort meal for me-yum!

btw, the dish is so pretty--I love green!

Great sounds meal - amazing adding the pistachios! And <3 High Fidelity - and my boyfriend <3<3<3 it. I'm pretty sure he wants to be John Cusack in that movie..

Julie - risotto is really quite simple. And if you do the basic oil and onion, add rice, add wine, add stock until cooked you can mix in just about anything. I always use the nutr. yeast for the cheesy taste but the other possibilities are endless. BTW, the amount I make is a LOT. For the two of you I'd use much less - though it is good leftover :-)

Jess - I had a risotto with pistachios in it years ago at a restaurant in SF. Yum. It's funny about John Cusack - my younger daughter enjoys his movies but she told me once "I only like him young mom - not old." Ouch - he's 3 years younger than me! I love him though - I think Say Anything is also one of my all-time favorites.