Well we're back - we survived the weekend. I'll post more about it later.

I really didn't want to go to the store yesterday so tried to make do with what was in the house. Luckily, we always have a lot of stuff on hand so we were in pretty good shape. I made pizzas using lavosh bread for the crust. It makes a nice, very thin crust pizza. I found a small container of homemade spaghetti sauce in the freezer and that was our sauce. I used one package of Follow Your Heart mozzarella, finely shredded, to make four lavosh pizzas.

First pizza was caramelized Vidalia onions and tofu "blue cheese." On this one I didn't use the red sauce but instead used ranch dressing. The tofu wasn't exactly like blue cheese (though it's been so long I wouldn't be able to tell you really...). What I was going for was something tangy and a little salty to go with the super sweet onions. I chopped extra firm tofu into a very small dice to make 1/2 cup. Then I added a tsp or two of ume plum vinegar, about a 1/2 tsp of nutritional yeast and some salt. I let it marinate for awhile and then I cooked it in a tiny amount of canola oil - maybe a tsp. Not to fry it, just to firm it up and eliminate the raw tofu taste. Whatever it was it worked - everyone loved this pizza 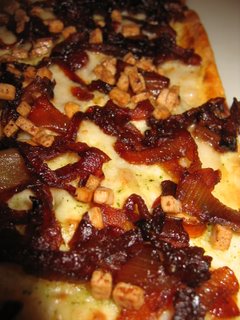 Next up - veggie canadian bacon and pineapple with red onion - another very popular one: 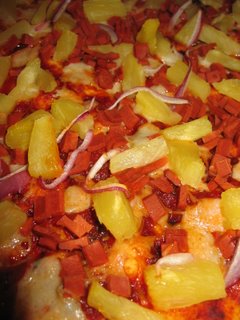 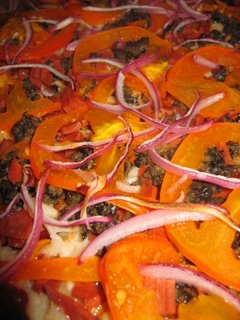 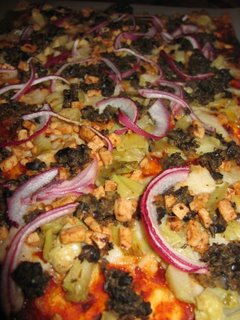 These pizzas are best when ingredients are chopped rather small and don't have too much moisture. The bottom two pizzas probably had too much stuff on them but they were still good. I baked these in a 450 degree oven - I think it was 10 -15 minutes or so because I had to keep switching them in the oven.

I had some leftover onions today and made an awesome sandwich: 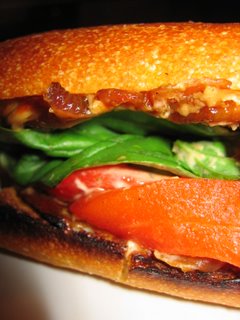 I mixed the onions with some better than cream cheese and spread it on a sourdough baguette. Next some sliced roasted red pepper (jarred). I put this under the broiler until it was hot and bubbly. Then I topped it all with fresh basil. Yum!!

they looks pretty yummy, i bet they taste awesome!

Good to see you back posting, Nancy. And ohmygosh, the pizzas look tres fantastique! How unique each is. I would love one or two slices of each, please! :o)

I buy lavosh bread frequently at Trader Joe's and use it in all sorts of ways, but never quite this beautifully!

That sandwich, like the pizzas, is almost pr0nographic it's so lovely and sweet!

you look like you've been busy since you got home. Yum Yum YUm : )

Where can I purchase lavosh crust? I see the comment from Kelopatra about Trader Joe's, but the closest one to me is about 350 miles. Thanks!
Lavosh lover