Still catching up on the last few nights... Wednesday night I made a stir fry with the veg chicken I get at the Asian market. It's called "spicy vege chicken" on the label and it actually has very few ingredients which is nice. It's spicy (but not too) and is so good in a stirfry. I sliced a couple of carrots on the diagonal, 3 celery stalks, a yellow onion, and 2 zucchini diced small. I still had some soy vay Chinese marinade in the fridge so I used that instead of making a sauce. 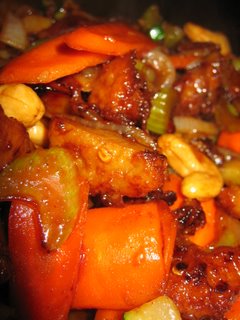 I had bigger plans this week than my schedule actually allowed - I had planned on making some spring rolls to go with this - but that sort of vaporized as the day got busier. I did buy all the vegetables though so I think that might be a good QFT project for this weekend (as my kids call it - Quality Family Time™).

Speaking of QFT... the reunion last weekend was fun - Hallie and I made a girls weekend out of it. We stayed at a bed and breakfast with my parents, my sister and her husband and my brother and his wife. We had this whole Victorian house to ourselves (though it wasn't as exciting as this picture might lead you to believe... ) 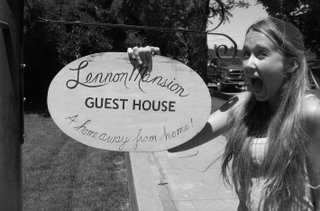 This reunion was a little less scheduled than some of the past reunions which was nice. We did a lot of shopping in our free time. A sure fire way to a teenage girls heart. 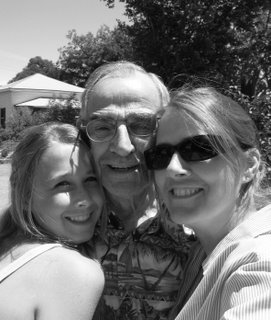 On our drive home we ventured off of I-5 (boring, boring, boring) and hit State Route 99. It was so incredibly beautiful - farms and orchards for as far as you could see. California seems like such a crowded, crazy place sometimes. Seeing these other parts is always amazing. It's a beautiful state.
Posted by Guinnah at 8:56 PM

GREAT GREAT family fotos!! Love them all, Nancy. Nice to see the b&w as well.

I'm a big CA fan and I've been all over our lovely state and I know of what you "speak" for SURE!