After the success of the BBQ seitan the other day I decided to try another dish based on that same recipe. I made the seitan but instead of peanut butter I used a Mexican chili sauce I got at the grocery store. Then I used that sauce for basting while it baked. After it finished baking I sauteed it in a little bit of oil with some salt and pepper and then added it to some sauteed peppers and onions. 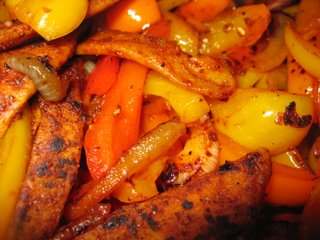 We had this on flour tortillas with diced avocado, soy sour cream and HOT salsa - they were really good and even Miss "I don't like Taco Tuesday" Hallie ate it. That makes two weeks in a row she has liked TT. Whatever is this world coming to?

Tonight was a school function/potluck - as I was walking along the table I made some comment about how nice it was that someone had labeled their lasagne as vegetarian and the woman behind me said "the chili we brought is vegetarian - actually it's vegan" - Cool. It was really good.

Two more days of school for the kiddos!
Posted by Guinnah at 10:02 PM

The seitan looks sweeeeeeeeeeeet! Beautiful, i'm sure in the tortillas with the fixin's.

I was touched by the kindness of the person who labeled their lasagna and also the woman who told you her chili was vegan at the school potluck/event. i have renewed faith in humankind at the moment!

Kleo - your comments are always so great - thank you :-) It's funny - because this was a music potluck (bass to be specific). A lot of kids go veg in middle school but quite a few of these have stuck with it a long time. It's great :-) And they always like it when I bring cookies etc. Last year at an ice cream party one girl who has dairy allergies was so excited to see my soy ice cream. She was happy to fit in!

I was psyched to read that to. I very rarely go to a potluck and find things labeled. That's is awesome.

Your seitan looks great. I may give the veggie ribs another try. They were not my favorite when I made them up a few weeks back.

Same here, we are having an ice cream party at work today. On the way to work this morning I picked up some Turtle Mountain soy ice cream. I suspect a few people will be happy I brought it.

I'm lucky at work - so many people are veggie that we often have veggie only potlucks!

Seitan looks so so good!

That must be a great recipe for it to beat TACO TUESDAY. I will admit, I love mexican food and Taco Tuesday just sounds good so I could see myself getting into that rut : )
only two more days wow!

That is really about the school potluck!

I've been experimenting with seitan too, veganizing Filipino favorites...and it's working.

Yum for this dish. Mouthwatering!