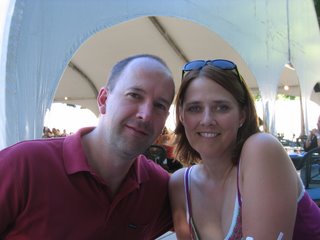 Another weekend away for us - this weekend we headed up to Clear Lake (the largest lake in California) and went to the Konocti Resort and Spa. The name makes it sound a lot nicer than it is ;-) There are a lot of activities, but we were there for a concert.

So Saturday morning we rolled out of bed, put on our bathing suits, packed up our lunch (we brought all our food since we'd rented one of their apartments) and started off on the long walk to the pool. We were walking up the hill when we saw the Konocti shuttle. We weren't super close but the driver stopped and signaled for us that he would wait. So there we are, the Dorkus McGee family traipsing across the parking lot with our towels, books and cooler. I hate making anyone wait so I felt badly as we boarded the little bus and just quickly took a seat. As I looked around I realized that everyone else on the shuttle was a) male b) young and c) looked tired and suspiciously like touring musicians. OMIGOD we were on the shuttle bus with Jason Mraz and his band. Anyone who knows me knows I am a HUGE Jason Mraz fan. I didn't want to act like Marcia Brady meeting Davy Jones - c'mon, I have some pride (but oh so very little sitting there in my swimsuit coverup) so we made some casual conversation with them before they got dropped off.

We found chairs at the pool and before long they showed up there too :-) We stayed until it was time to head back to get cleaned up for the concert. We had the pool attendant call the shuttle for us and we climbed in hot and tired. Wouldn't you know it - the bus made one more stop - yup, another ride with M-R-A-Z. Our apartment was right near the amphitheater so we got ready listening to the soundcheck, had dinner and then headed into the concert. 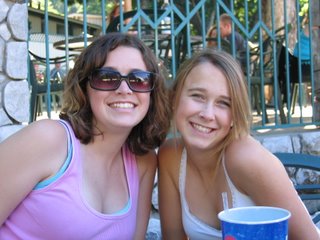 It was HOT and our seats were in the glaring sun but as usual, he put on a fantastic show.


Since he was the opening act there were still a lot of empty seats (if only those RobThomas fans knew what they were missing...) . Here's what they missed: 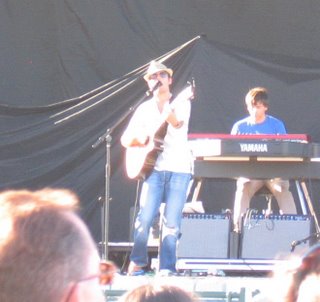 It was a great weekend. If you ever want to check out a highly talented, immensely entertaining act get thee to a Jason Mraz show.

Tomorrow night we're having Hallie's birthday party (she's doing a party with a friend who also has a July birthday). So not much cooking - just lots of cleaning and organizing! A virtual Virgo nirvana!
Posted by Guinnah at 7:42 PM

no
you could not possibly be ANY CUTER!
and i totally laughed outloud at you playing the part of Marcia Brady
LOL

From the queen of cute that is high praise indeed :-)

i sang with jason mraz once :)

I think I would faint dead away
;-) What did you sing?

Great post, Nancy! I love that you are such a fan (no, i did NOT mean groupie!)... hee hee... Jason Mraz had a big following here in San Diego at one time. I think he got his start here! He also once appeared in a magazine (local) wearing a Rick Springfield t-shirt, so now you know i'm a fan as well. I'm so happy you had a good time! YEAY!! You look SO happy. Very wonderful to see that...

Davy Jones... hmmmm... Jason and Hallie for the prom?! Marcia fixed it so she could do that, no? Or was it just the 8th-grade dance? My mind's going. And i'm like the hugest Brady Bunch fan, too. You made me giggle with that reference. Your exuberance is delightful...

Happy birthday Hallie and have a blast doin' the Virgo thing. I heart you crazy cleaning and ostensibly organizing Virgo vixens! You drive me crazy but in a good way...

ooh someone sang with jason mraz? :)

Looks like you're having a great time! keep us updated

How dang neat! My heart would have been racing.

WOW!!! That is so cool!! I was just at Konocti two weekends again (first time, and yes, I was surprised at how kinda grimey it was) but I sure didnt get to see Jason Mraz up close and personal. WAH!!

I could never figure out which one you were in the little picture in your profile. No matter how hard I looked at it - you all look the same age. Glad you posted a better picture. What a beautiful woman you are and gorgeous daughters too. Super jealous about the Jason Mraz incident!!!

thanks for the comments you guys...

Glad I am not the only one (over 13)with a celebrity crush!

Your post made me smile, Nancy! I do love Jason Mraz too! He's awesome!

he did indeed start in san diego! i'm a singer/songwriter here. i went to one of his shows and he was inviting people to come up and freestyle, so i did. sang some blues...it was fun! he is definitely an amazing performer....

Missing you, Nancy... Hope all is well!!