Did you hear the loud thud? The sound of me falling off the edge of the earth?

Back when we were younger and had our first child we thought it would be really nice to space them two years apart. So three weeks before our first child turned two we brought home our second. We Virgos - we don't mess around with plans. The girls actually had the same due date - Ana was a week late, Hallie two weeks early. The one thing we didn't really think about was birthdays. July turns into birthday month around here. And ironically - they both have lots of friends with July birthdays. So I've basically been either shopping for a party, cleaning for a party, hosting a party, cleaning up after a party....you get the idea.

Not to mention it has been well over 100 degrees for days on end (it was still in the mid-90's last night at 10pm). I really haven't prepared a meal for our family for quite some time. Lots of takeout, pita and hummus, simple salads. In other words, nothing anyone would really care about! But I'm tired of takeout Chinese, I'm really tired of hummus so I need to get inspired and get cooking.

But in the meantime I'm off to see Jason Mraz AGAIN tomorrow night. I know, I am far too old for this nonsense. I am taking my best friend Jen, Ana and her best friend (they share the same birthday!). This is a birthday gift for Ana and her friend. Hallie is gone and while I feel bad she will be missing the concert I have to remind myself she is in Costa Rica. Surfing.

So...until I get something going in the kitchen...some pooch pics: 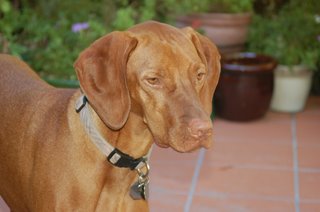 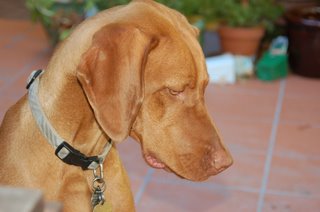 It was a year ago today that I went to see Renzo for the first time. I had been resisting a puppy from this litter (Renzo is Bella's nephew). I found out there were two puppies left - both males - and we could get one if we wanted. So before I got anyone's hopes up I took Bella over to meet the puppies to see how she would do.

The one we took home two days later (the puppy, not the boy!) 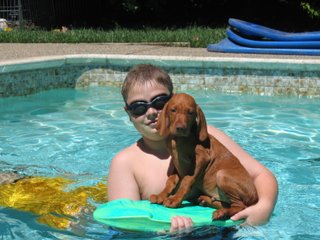 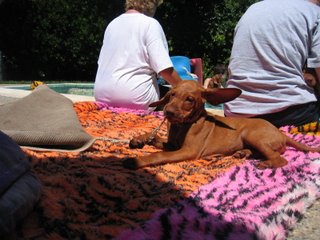 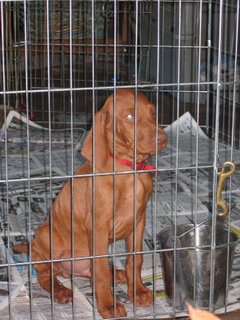 Can I just say that it is nearly impossible to visit a puppy and not take it home? I was a goner. I went from "No. I mean it No. We will never get a dog. Never - do you hear me?" to two dogs. Two dogs that I cook for (I've cooked more for them the past two weeks than I have for us!). I've learned my lesson. Never say never. Vive le Vizsla!
Posted by Guinnah at 10:55 AM

I got warm fuzzies at first, then laughed so good and deep at this post.

It's great; and so are you.

Bless you for letting all the love flow in... your husband, your daughters and the dogs!

Say hi to Jason! We love him here in 'Diego... I know you will have a great time at the show. Yay for you!!

I am in LOVE with Vizslas. If only my husband would let me have a kazillion dogs... Anyway, my best girlfriend growing up had a Vizsla named Copper (as in Penny). She was so darned cute and sweet. She had to sleep in someone's bed under the covers. If she couldn't find an occupied bed she wandered the house whimpering. Love to see the pics. Have fun at the Mraz concert!

Wow...HOT! But you can't complain cause we had 100 degree days and no electricity for four days! Hellish. (We are currently loving having electricity...yay!) Enjoy your concert, you hip chick!

These are the cutest puppydogs!

happy birthdays everyone! i can't believe it's been a year since you got renzo! i think you should bring your dogs to the San Fran SIS walk!

aww puppies!
that's great and a lot of birthdays too!