Tonight was a pasta night. We had pasta carbonara from the Millennium cookbook. I followed the suggestion from the cookbook and added some sun dried tomatoes, capers and fresh peas. It had a bit of a bite to it due to the cayenne pepper but it was devoured by everyone (including a friend of Hallie's). I'll definitely make this again. The only time it took was cooking the garlic (1.5 hours). But putting the actual sauce together is a cinch. 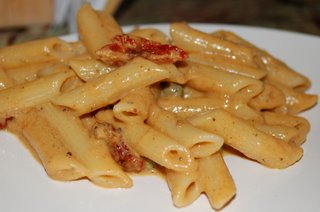 We had this with a spinach salad, organic strawberries, watermelon and a loaf of French bread.

I got a new camera and am still trying to figure things out. It's a digital SLR instead of a point and shoot (although you can use it that way). It's a fun new toy :-)

Here are some random pictures I've been taking...

Grapes growing on the trellis 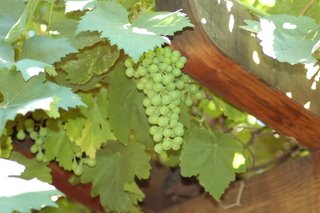 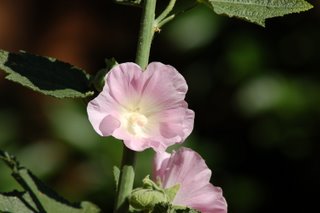 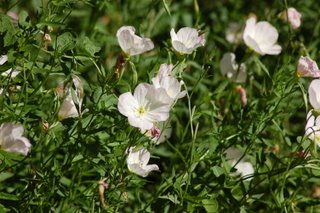 And lots of dog pictures (people complain after a few - the dogs just put up with it). I'll post some pup pics another time!
Posted by Guinnah at 5:15 PM

I look forward to the dog pix (big surprise, 'eh?!)... Love the pasta with fresh peas (i can see one cutie "pea"king out from the pasta). Lovely and tasty, i'm sure!!! Your grapes are gorgeous!!! The flowers are so pretty. I wish i had a garden!!!

Hey Kleo - there will be dogs pix for sure. they are such compliant models :-) I didn't put too many peas in the pasta - I got tired of shelling them (it ranks up there with pitting cherries...). It was a great pasta dish - I've never had a failure from Millennium!

i would never complain about too many dog pics! love, rizza

That pasta looks good; I'll have to look at the recipe when I get home!

That pasta looks delicous.. I saved the recipe and will definitely be giving it a try.. anything with a cup of garlic and chipotle peppers is good by me!

Post all your dog pics! I love dog pics and I think a lot of people here do too..

Congrats on the new camera...what fun. I love to look at food pictures, and who can resist dogs?

Beautiful shots - and the pasta looks incredible! Thanks for the recipe link, too - I have the Artful Vegan - also with Millenium recipes - but it takes a lot of courage and ingredients for me to get into it.

ps
where are those pup pics?! I wanna see em
:)