Here it is - the last weekend before school starts. This summer seemed to fly by...I certainly didn't accomplish half the things I'd hoped to.

I've been doing some cooking - just not blogging. Here are a couple things we've had lately:

Roasted vegetable ravioli (Rising Moon Brand) with olives, tomatoes and basil. I had a container of olives, mushrooms, peppers, etc from the olive bar at the grocery store. So I sliced everything and warmed it up in a bit of olive oil. Then I tossed the ravioli with that mixture, chopped tomatoes and basil from the garden: 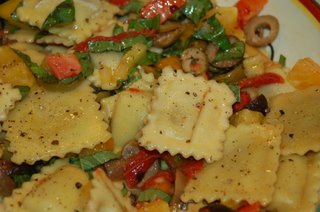 I made some quesadillas with the Follow Your Heart nacho flavored cheese - I'd planned on using the monterey jack flavor but they didn't have it at the store - I'd never tried the nacho and it is actually pretty spicy which was fine for us but Hallie thought it was too hot. I roasted some poblano chilies and cut them into strips and put the cheese and chilies in large corn tortillas. I used just a little bit of spray oil and cooked them until the cheese was melted and the tortillas were browned. These were so simple but very tasty - served with refried black beans and homemade guacamole. Hallie actually came home from Costa Rica liking black beans and guacamole - that alone made that camp worth every penny! 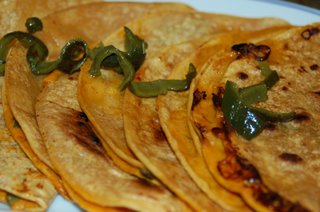 Tonight we're having my best friend and her family over again - they are like family to us and I love cooking for them. I'm going to make the Millennium pasta with garlic cream sauce that I made awhile back. It's so easy and it was a huge hit in this household! I'll also be trying out another dessert so I'll post that if it turns out. It's hard to believe that 48 hours from now my kids will be back in class...
Posted by Guinnah at 9:15 AM

Richard will be starting school again soon too. I'm going to have to come up with some recipes for dinners he can eat on the road (school is 100 mi away) These quesadillas will probably be one of them

amber started school last wednesday. and i start school on monday. can't believe summer is over. :-(

Yeah... school starts here soon too. That's unfortunate for me, since I *work* at a school, but at least the leaves will be changing color soon. I love autumn!

BTW, I'm not sure what it is about your photos, but of all the blogs I visit (and I haven't for a LOOOOONG time, it's great to be back), yours always makes my mouth water. Literally!

Please keep the photos and food coming, you inspire me to eat healthy!

Awesome foods as always! YUM! I haven't seen that brand around here but I will be on the look out and visit the site! Thanks for the info!

Both look yummy, and, most importantly for me - simple! I love the idea of using my olive-bar-goods with pasta! Why didn't I think of that?

And poblano chiles are one of my favorite things on earth! Yummy -- adding to my list!

Summer did fly by! Your ravioli looks buenissimo!!! Well, something like that. Really gorgeous and makes me long for some good veggies and lotsa pasta!

Would love to know how the pasta w/garlic cream sauce turns out. No doubt FAB!!!

FYH has the best "cheez" - it's hard for me to find though!

School's in... wishing a great year for/to all!

Those look excellent. I like the flavors of the Rising Moon vegan raviolis.

Looks very good! Pasta is a favorite of mine, especially when I need a quick meal fast.