The craziness that is the school year has begun. And other than dropping one kid off for soccer practice on the wrong day and leaving half an hour early today (they start late on Wednesdays) - it's gone okay ;-)

Our dinner with friends the other night went well. I made pasta with garlic cream sauce and it was as awesome as the last time I made it. Truly - an amazingly rich tasting sauce without a drop of cream. My friend told me a funny story from the last time they were over for dinner. That time I made tostada salads and used the smartground taco/burrito soy meat. My friend's 9 year old daughter was talking about the dinner on their way home and how much she liked the salad. But then she said in a worried voice "did they eat the meat that was in it? I think they ate meat mom!"

We also had some delicious bruschetta with heirloom tomatoes and basil. My birthday is next week and it happens to fall the day before Millenium Restaurant holds its annual heirloom tomato dinner. So we will be having my birthday dinner a day late so that we can try this menu. I can't wait!

For dessert I made a really simple but delicious plum galette. 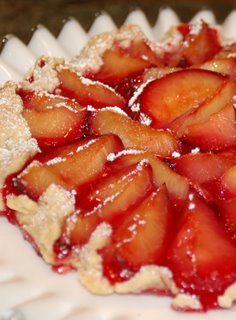 I had bunch of organic plums I'd gotten at the Berkeley Bowl and a single pie crust in the freezer. I used this recipe from epicurious.com. It was easy since I already had a crust. I didn't leave enough of a border to really wrap the dough up and over the edges but that gave me more room for plums. For a topping other than their suggested crème fraîche I made spiced rice dream from the Millenium cookbook. It made an excellent topping and complemented the plum flavor perfectly.
Posted by Guinnah at 3:58 PM

The story about your friend's 9 year old is precious. Your pics look delicious and the Plum Galette is a great way to use up summer plums. I love it when vegan dinners with friends turn out great! It's always nice to wow them and show them how fabulous veg eating is.

I know - I thought the story was sweet. They are fun to cook for because they love everything AND they cook fabulous vegan meals when we visit them :-)

"did they eat the meat that was in it? I think they ate meat mom!"

Best quote from a 9-year-old girl that i've heard in a long, long time. What a caring kid, and the fact that she is so aware... that makes me smile!

The plum galette is lovely, truly!

Ah the start of school... hope the year goes well for you and your sweetie daughters, Nancy! All the best to you...