I got one kid home from Costa Rica (not without incident I might add - a missed connection - but they did get on the last flight out of Miami...) then turned around the next day and headed back to the airport to drop the other one off for a flight to UCLA and two weeks of performing arts camp. It's been a busy household with the washing machine running non-stop.

Saturday night we had my best friend and her family over for dinner. I made tostada salads - it was simple but good. I served some jicama that was tossed with lime juice, salt and chili powder. The little ones visiting thought they were french fries - I think they were a tad bit disappointed but the rest of us loved this healthy, crunchy dish.

For dessert I made two different things - both extremely simple - but very well received. First I had a new vanilla rice cream - Good Karma Very Vanilla Rice Cream (I got it at Trader Joe's). I let it soften a bit and then spread it on Anna's Ginger Thin cookies. I topped it with another cookie and then popped them back into the freezer. This was popular with everyone but particularly the kids: 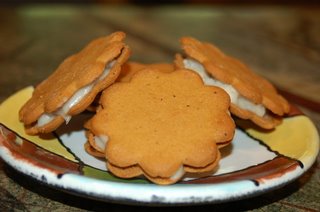 I also made individual deep dish blackberry pies. I was able to pick some blackberries on our street but not nearly enough so I got some frozen organic blackberries at Whole Foods. I cheated on the crust - I had a frozen pie crust (also from WFM) and used a cookie cutter to cut out circles that I placed on top of the berries. Then I used all the various scraps and placed them around the edges. I brushed it all with soymilk and sprinkled it with cinammon and sugar. I baked them at about 425 for 30 minutes. 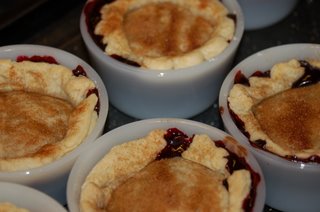 These were so good. I've never been a big pie fan - I don't dislike it - it's just not one of my favorites. But the pie I do love is blackberry or boysenberry. And what I'm after is the fruit, not crust so I like this deep dish option.

We only have two weeks until school begins again - hopefully I'll be able to post more once the routine settles in. This weekend I'll be playing in San Francisco with the sistahs (my online young cancer survivors group). We know how to have FUN!
Posted by Guinnah at 11:12 PM

Glad the comin'-back-from Costa Rica-incident wasn't a serious one! How much fun to go to a performing arts camp... and at UCLA! Wow, you and your kids are sure busy with life...

Fun to have your best bud and her family over for din din, no? Jicama is so wonderful. It took my taste buds a while to get into 'em. The kids probably will try 'em again in a few years and the memory of when they had 'em by you will get that light bulb flickerin' above their head. "Ah ha! Jicama!"

Can i just tell you how amazing the cookies and rice cream look? My stomach's growling!!

HAVE FUN THIS WEEKEND!

Have fun in San Fran!!

Hey, just wanted to let you know I've been reading.

From the Teriyaki Portabello entry.. "This isn't the most complicated cooking I've ever done but it was good :-)"

Hey, I'm just 18 and still learning to cook/bake. So I'm a fan of the easy stuff too, keep posting!

Yum blackberry pies! What a great idea. I love the fruit pies. Can't wait until apple picking season and I'll be going a little crazy with it.

those dessert look absolutely delicious! ill be sure to make them soon! thanks!

what incredible looking desserts. Wish I could have sampled.

2 of my fave words...simple and desserts!

I'm also a fan of Jason Mraz. I love his play on words!

I Just wanted to let you know that I have moved my blog to:
http://harmonia.bloggoing.com and will be doing my blogging from there now. I will keep my old blog active for my blogroll, Daily OM, and as a backup. Swing by my new place when you have a minute to say hi! Have a great day!

i AM a big pie fan! and little pie fan in this case! :o) i love the idea and want to copycat soon. enjoyed your blog & hope you have a fabulous time in san francisco -- are you going to millennium?

How can you not like pies? I'd totally take a slice of pie (any kind) over a piece of cake any day. Your mini pies are so cute and the perfect portion controlled size. I'll definitely be trying to make them soon.

You are not alone Nancy - I am not a big pie person either. Mini pies sound way better and they are adorable.