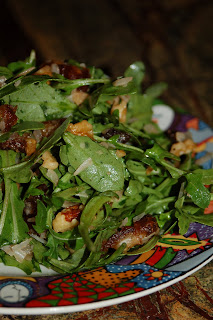 It has happened again. Life getting in the way of cooking. No one is home anymore - dinners have been haphazard (quesadillas at 9 pm) or takeout. It is our last year with a kid in school (K-12 anyway...) so I've volunteered for a ridiculous amount of stuff - sort of the last hurrah. Hubby has sort of given up on his gluten free eating - he was at it for a few months but didn't notice any difference other than some extra pounds (presumably from all my attempts at gluten free baking???). Since he was doing it for personal reasons and not medical reasons it wasn't a big deal to stop - but it certainly gave us an even greater respect and admiration for our friends who deal with multiple food allergies and sensitivities who can't just make that choice!

One thing I've made several times in the past weeks has been this salad. It is my take on the compressed manchego salad we had at Uva Bar in downtown Disney. It goes together quickly and it's a great combination of flavors. All of these amounts are flexible - use as much or as little as you like -

1 bag prewashed arugula (I get it from Trader Joe's)
5 large dates, pitted and cut into small pieces
1/3 cup walnuts, toasted and chopped
1 large apple (I like pink lady apples) cut into thin matchsticks
Coarsely grated manchego cheese - as much as you like
I toss this all together and drizzle with some olive oil and balsamic vinegar and season with salt and pepper.
Posted by Guinnah at 3:40 PM

I have SO been planning to make this since your last post!

Unfortunately, our regular grocery store doesn't carry arugula (what?), so I do need to make a trip to TJ's. Thanks for the recipe - now I've got my shopping list!

I see that you’re interested and fascinated in food stuffs. You see, we have this food site Foodista.com that is a food and cooking encyclopaedia that everyone and anyone can edit. Maybe you are interested in sharing some of recipes to us or share your knowledge about food stuffs and techniques. Not only that you help us and other people in tasting new recipes but your submitted recipes will be raffled. You will have a chance to win $100 gift card to Sur La Table by just sharing your recipes to all. One entry per recipe, the more you submit recipes the better your chances. Click HERE for more info about the drawing. Or maybe you can try our link back system at Foodista an easy way to get link backs between two food related sites, if you’re not into sharing your recipes or knowledge. Enjoy and see you there!