One of my very favorite places to eat in the bay area is Cactus Taqueria.  When I get my hair done in Berkeley it is a ritual - hair, then tacos.  The neighborhood where I get my hair done has so many good restaurants - Indian, Thai, even Zachary's Pizza (deep dish spinach and mushroom - yum!).  But every single time - I go and get my tacos.  They have crispy veggie tacos - grilled vegetables, cheese, guacamole, salsa and lettuce.  I would be too embarrassed to ever have more than one order (I mean, it's a plate with three tacos!) but I swear, I could do it. 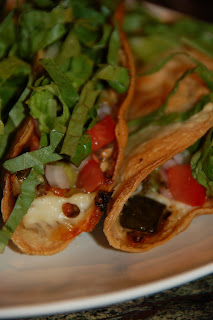 I've never been into frying anything at home but sometimes the craving for those tacos is too strong to wait for the next haircut.  So one day I decided to make my own oven baked version.  I roasted some vegetables in the oven - some broccoli, zucchini and carrots - tossed with some olive oil and roasted in a 450 degree oven.  Once the veggies were nice and brown I warmed up some corn tortillas on the stovetop and then filled them with the veggies and some monterey jack cheese.  I folded them over and spray both sides with some olive oil spray  I put these in the oven for maybe 15 minutes or so, until the tortillas were brown and crispy.  Once out of the oven I pried them open and filled them with guacamole, salsa verde, chopped tomatoes and thinly slice romaine.  They were almost as good as the restaurant version - really, just as good for me - and there was no oil dripping out as we ate them.

Taco Tuesdays are still in effect in this empty nest and these definitely fit the bill!
Posted by Guinnah at 9:24 PM

I am in awe of your food photos! I have a good SLR digital camera but my food pics suck so much that I never use them. Tips?

I have a Nikon D50. When I can manage, I prefer to take the pictures outside in natural light. But of course that isn't always possible! I try to get as close as possible and get down to a little above eye level. And I usually take 5 or 6. And I'd say that 9 times out of 10 the first picture is the one I end up using!

Those tacos look AMAZING! and I agree with Lynn about your photos. I got a new Sony cybershot that had a "gourmet" setting for "taking natural looking photos of food". I wonder if that has become a standard setting on cameras now!