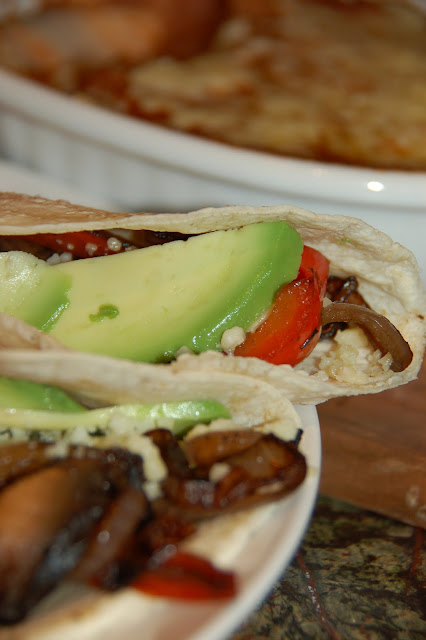 I finally made it into my favorite store tonight - the produce bin in the refrigerator was down to some Brussels sprouts (on the stalk) and half a cabbage.  I am creative but I am not a miracle worker.  Clearly some fresh produce was in order.  Since it's Tuesday and that's means Mexican food I decided to pick up portobello mushrooms and red bell peppers for fajitas.  Everything went together quickly and alongside some refried beans topped with an extra sharp cheddar (baked in the oven at 450 for about 15 minutes) and some fresh fruit, we had an easy, but good dinner.

Saute the mushrooms slices in a small amount of oil until they release their moisture and start to brown.  Add onions and peppers, salt and some red pepper flakes and more oil if necessary.  Once everything is browned serve them in corn tortillas that have been warmed and top with cheddar, sliced avocado and hot sauce or salsa to taste.

Tomorrow I plan to post more about my favorite little store so stay tuned!

These fajitas look fabulous with all those bright flavors!

Wow, i am loving this photo. Drool worthy!! The recipe actually looks do-able (for me, very challenged in the kitchen) so i might try it...

So great to see you blogging again... i'm still not back, but maybe some day.