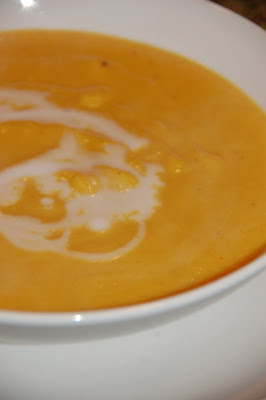 There's a storm coming to the bay area.  Rain, wind, even snow down to 500 feet in some areas.  That's a big deal around here.  So today was the rush to get the Christmas lights up on the house.  This task also involves cleaning out the gutters so it was a big job -  I don't do heights so it's not my big job mind you.  Turned out the fig tree was attempting to take off the roof with one of its branches and the grapevine was hard at work snaking its way under the shingles so there was a lot of pruning to be done.  As per tradition I ran out to get more lights while B was on the roof  since there was one string not working.  Everyone was out - the hardware store was full, the road was full of cars with trees strapped on top - people getting things done before the rain hits.

I put out Christmas decorations on the porch and was then left with four pumpkins that we'd used for fall decorating but hadn't carved.  Normally I would toss them in the green bin.  But the bin is always full and I felt a little guilty just tossing them.  They were in perfect condition and I figured I could at least toast the seeds.  Then I decided to cook the pumpkin in the microwave thinking I could freeze it and use it a bit at a time for the dogs (they love pumpkin).  But this was getting to be a lot of pumpkin and I also didn't have anything planned for dinner.  I couldn't face another trip out so decided I'd make a Thai flavored pumpkin soup.   I roasted two smaller pumpkins (cleaned out and cut into large sections) in the oven -  I rubbed them with olive oil and seasoned them with some salt.  They probably took close to an hour at 450 degrees.  I threw the cooked pumpkin in a soup pot with a can of coconut milk, some red curry paste and some salt.   Then I just started digging in the fridge - I had two opened containers of vegetable broth leftover from recent cooking.  In they went (probably two cups?), some heavy cream - which was leftover from Thanksgiving - it went in as well.  I never use cream in soups but figured this would get thrown out if I didn't use it.  I decided it was missing something so I sauteed an onion in some olive oil and then added that in along with some powdered ginger.  I pureed the whole thing with my immersion blender (one of my "can't live without" kitchen tools).  It was delicious and I felt so virtuous using up the pumpkins.  We had an awesome dinner, I have several containers of cooked pumpkin for the pups and a big bowl full of crunchy, salty pumpkin seeds.  Now if only Mad Men were still on it would be a perfect Sunday!

Your soup would be the perfect food for me right now!

You inspired me to buy a (locally grown!) pumpkin today. The weather forecast suggests that this will be an excellent weekend for soup.