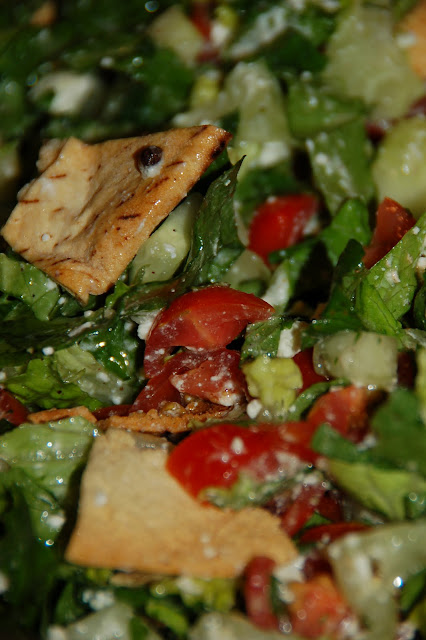 I've had many version of fattoush, the Lebanese salad with crisped pita bread.  Some have a long list of ingredients, others are more simple.  It's really a flexible thing and subject to personal taste and what you have in your vegetable bin.  I have several cookbooks with recipes (I've had the Paula Wolfert version which is delicious) but I found this one online that called for cilantro - which I happened to have on hand.  I had all the other ingredients as well so this is what went on the table.  Even though we've mostly had cold weather (relatively speaking, I know...) I was in the mood for a big salad and this definitely hit the spot.

Serves 6 as a side dish

To make the pita chips, preheat oven to 350˚.  Trim edges off of the pita, keeping a circle shape, so that the pita can be split into two halves.  Cut each half into 6 triangles and arrange on a baking sheet. Toast for approximately 12 minutes, or until the pita chips crisp up and are golden brown.  Turn baking sheet halfway through baking. Set aside and cool.

Break the chips into large pieces.

To make the vinaigrette, in a small saucepan over medium-heat, toast cumin until aromatic and light brown, approximately 3 minutes. Toss occasionally to prevent burning.  Let cool and set aside. Grind in a spice grinder until cumin becomes almost like powder. In a medium bowl, whisk together the garlic, lemon juice, rice wine vinegar, cumin, extra virgin olive oil and olive oil.  Season to taste with generous amount of salt and black pepper. Set aside.

To serve, toss romaine hearts, cherry tomatoes, feta cheese, mint, cilantro, red onions and olives with the vinaigrette in a large bowl, making sure that the leaves are well coated with the vinaigrette.  Divide the salad among 6 chilled salad plates. Serve immediately.

oooh, this looks really good. I am craving fresh greens - it's been so blah and gray here. And I have a bunch of cilantro in the frig...

What a wonderful photo, it looks really delicious!I saw your site from the foodieblogroll and if you won't mind, I'd love to guide foodista readers to your site.Just add a foodista widget at the end of this blog post and it's ready to go.Thanks!

Sam - it's been blah and gray here too. We saw blue sky the other day for the first time in weeks - it was magical!

Alisa - thanks for stopping by. I went ahead and added the widget and will check out foodista :-)

I love this salad. I add sumac which you can get from Penzy's spices
http://www.penzeys.com/cgi-bin/penzeys/shophome.html

We love sumac - we use it all the time in Persian cooking. :-)

Thank you so much for taking my comments on board....I am so glad I bought this app and so looking forward to the future updates