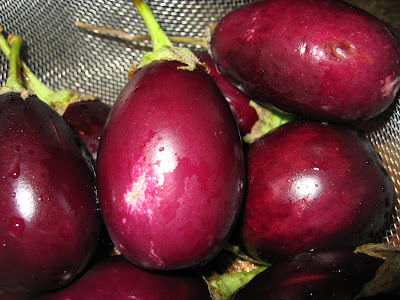 Every now and then, the small market where I shop will have these little eggplants.  I had nothing particular in mind when I bought them but they were too cute to pass up.  Our Christmas dinner was at my sister-in-law's house and I'd said I'd bring a vegetable or two.  Problem was, the day got a little busier than I'd planned and at 2:45, with a 4 pm departure looming, I hadn't started cooking.  I had the eggplants and also had Brussels sprouts on the stalk.  I had a basic idea of what I wanted to do so quickly scoured the internet for a recipe to use as a guideline for the eggplants.  I found a recipe on the Vegetarian Times website that was pretty much what I had in mind and I followed it loosely.  Below is how I made it. 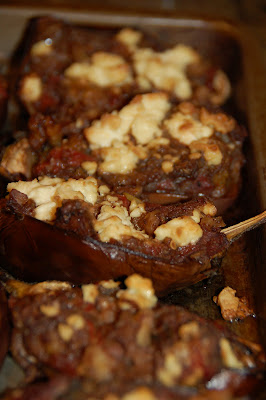 Preheat oven to 450. Cut eggplants in half, leaving stem intact.  Scoop out the inside of the eggplant, leaving about a 1/4" shell.  Coarsely chop the eggplant that has been scooped out.  Spray a cookie sheet with oil and put the eggplant shells face down.  Spray the tops with a bit more olive oil and put them in the oven while you prepare the filling.

Heat a small amount of olive oil in a saute pan and add the garlic.  Give it a minute and then add the chopped eggplant.  Cook this until the eggplant is softened and cooked throughout - about 6-8 minutes.  Then add the drained tomatoes, the walnuts and breadcrumbs and season with salt, pepper, oregano and a dash of cinnamon to taste.

Remove the eggplant shells from the oven and turn them over for stuffing.  Evenly distribute the filling among the shells and top with feta cheese.   Bake for about 30 minutes, until the shells are softened and browned and the feta cheese is browned and bubbly.

I covered these loosely with foil (with a vent so they wouldn't steam on the long drive) and then gave them just a few minutes more in the oven before dinner.  They survived the drive and the reheating just fine.  We had a couple leftover that were delicious leftover as well.

These could easily be made gluten free with a GF breadcrumb option.  Vegan, leave off the feta or substitute with a crumbly tofu "feta"

I can see why you were so taken with these - they are so pretty. (I can't tell you how many veggies I don't really care for that I've purchased just because they were pretty at the farmers market!) But sometimes, it's just a matter of finding a good recipe, right? This one looks delicious.

I agree JGH, I often fall prey to the beauty of a vegetable with no real intentions. But it does keep things interesting!

I really enjoyed reading your blog. You know what,Foodista announced that they are going to publish the best food blogs in a full color book that will be published by Andrews McMeel Publishing this Fall 2010. You have some really great recipes and I thought how great it would be if you could join in this event! You can find out more about it at this link http://www.foodista.com/blogbook. Hope you wont mind if I left this message here. I wanted to email you but couldn't find one, so I dropped this message instead. Hope you do join. Thanks!

Hi there again! Great and tasty recipe. Have you thought of checking out Foodbuzz.com? It would give you a chance to share your recipes even more and would increase the number of readers for your blog. Great stuff!

Hey Noelle...I am already signed up on foodbuzz..it's hard keeping up with all the different food blog-related sites :-) Thanks for visiting again!