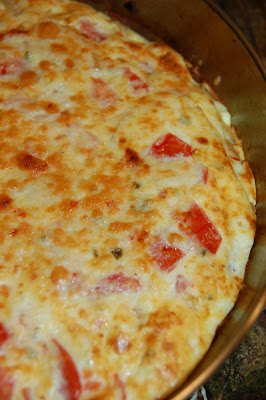 The name of this frittata comes from the cheese I used - I had a wedge of cheese in the freezer that I'd bought at Costco - I tend to overbuy for parties and will freeze things rather than having them sit in the fridge.  It is called Yancey's Fancy Jalapeno/Cayenne Cheddar - so naturally I needed to use it in something where the heat would be appropriate.  I also happened to have a lot of eggs on hand so the decision to make frittata was pretty much made for me.  I was really happy with the way this turned out and I have to credit the cheese - the flavor was so good.  I don't know that a regular pepper jack would work as well - the cheddar really gave it a lot of flavor.  I think in the future I'd do a mixture of pepper jack and cheddar as I don't think this is something I can easily get again.   I also have a wedge of their horseradish cheddar and am looking forward to trying that out as well.  I started out this week determined to cook as much as possible from what we had on hand and haven't been to the store since Monday - we have one blood orange in the fruit bowl and nothing but lemons and limes in the fridge (but fresh oranges from our tree) - time to get to the store!

(or a mixture of pepper jack and cheddar)

You will need an oven-proof skillet for this recipe.  Preheat the oven to 450 degrees.  Saute onion in a teaspoon or two of olive oil over medium-high heat until the often is softened and begins to brown.  In the meantime, whisk eggs with milk and then add in about 2/3 of the cheese and the tomatoes - season with salt and pepper. Once the onions are browned, pour the egg mixture over the onions and cover the skillet.  Cook on the stovetop over low heat until the edges of the frittata begin to brown and look set.  Remove cover, sprinkle the remaining cheese on top, and place the skillet in the oven and bake until the frittata is set in the middle - about 10 minutes.  Finish under the broiler until the cheese on top is browned and bubbly.

I tried a frittata for the first time the other week. Loved it! Glad I found a recipe for it. Thanks!

After skimming through your website I immediately bookmarked it. Keep up the good work!
SEO Services

Hey Austin - this recipe was super easy and made use of what we had on hand. I'm sure you could get pretty creative with it! thanks for commenting!