It was a scorcher this weekend - close to 100 degrees.  Yesterday was one of those days where everything moved in slow motion - including me.  I finally made it to the market and came home with plans to do some grilling.  And then of course the propane tank was empty.  ugh.  So off to the gas station to get it filled and then, finally, I got our dinner going.

I had a beautiful bunch of rosemary from our CSA so I grabbed several stems and tossed the rosemary with some russet potatoes, olive oil, salt and pepper. 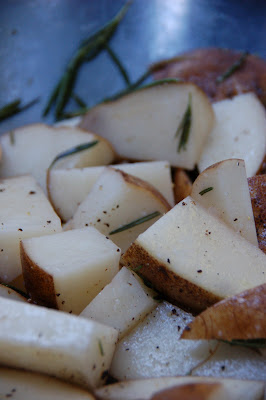 I put these on a grill pan on the gas grill and cooked them over low heat.  Sometimes I'll lay the potatoes out very neatly and turn them evenly (because I am a Virgo and those kinds of things make me happy) but today just wasn't one of those days - so on the grill they went in a messy jumble 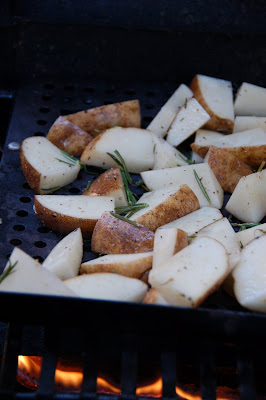 I checked them every few minutes and tossed them around with tongs.  They were ready after about 15 minutes 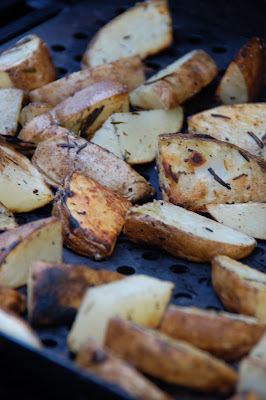 These went into a large bowl and were splashed with some rice vinegar.  Next on the grill was one eggplant, sliced into rounds and a large red onion, cut into slices.  All brushed with olive oil and sprinkled with salt and pepper.  The eggplant and onions were on the grill a little longer, 20-25 minutes. 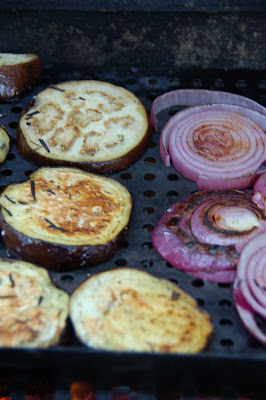 Before adding these to the salad bowl I cut up the eggplant rounds into smaller pieces, the onions I just left in rings.  I added about a 1/2 cup of chopped Italian parsley, a few more splashes of rice vinegar and some salt and pepper.  We ate this at room (outdoor?) temperature along with veggie burgers and watermelon.  By our (late) dinner time, the temperature was much more comfortable and it was a perfect night for eating outside.  It was also a perfect night to light up the fire pit and make s'mores! 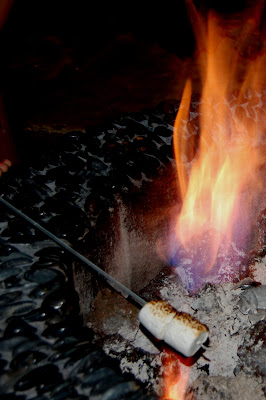