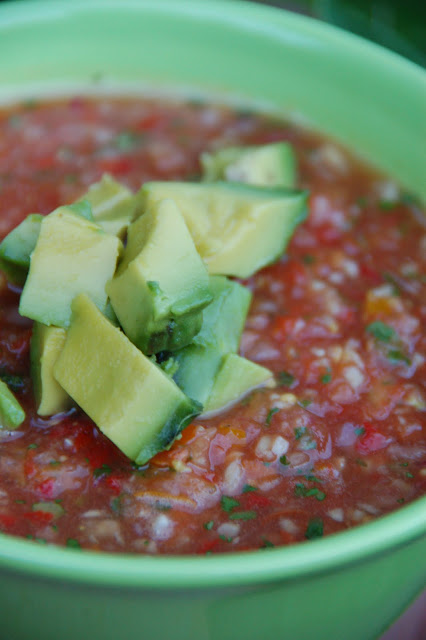 I will admit - I've never been much of a chilled soup fan.   I've tried several and always enjoyed the flavor but just couldn't see myself indulging in a full bowl.  But while meandering through some favorite food blogs I stumbled upon this recipe at thatveganblog.com.  I don't know if it was the way she described her own previous feeling on the whole gazpacho thing or what, but I was suddenly very motivated to make this!  I think mine ended up being a little more blended - I kept adjusting the seasoning and would give it another pulse each time - but it was truly outstanding.  I had to adapt it a bit to what I had on hand but we loved it (and when  I say "we" I am not including little miss soup hater) - I can see this getting a lot of replay this summer!  The cucumber, onion and garlic were from our CSA, half the tomatoes were a gift from someone else's CSA and half were from our garden as was the lemon and chile. The recipe as I made it is below: 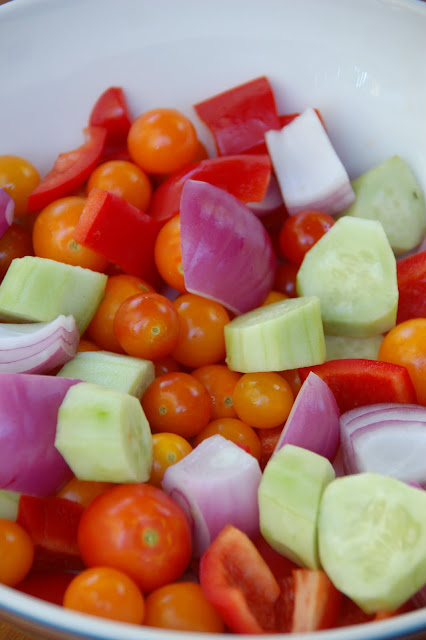 Roughly chop the tomatoes, cucumber, bell pepper, and onion into large chunks
Add the veggies and everything else to a food processor and pulse until you have very small pieces (the size of a kernel of corn or smaller).
Taste and add more vinegar, lemon, olive oil and/or salt & pepper if necessary.
Top with diced avocado, guacamole, a dollop of sour cream, sprinkle with corn kernels cut right off the cob or all of the above!
Posted by Guinnah at 8:39 AM

This looks great! Have been meaning to make some. Now just need to remember to stop and pick up some cilantro...

That looks really delicious -- may have to try it next week. Did you use the bell pepper or extra cuke? Bell pepper and I dislike each other...

sam - it is definitely worth making. Only took minutes and I was surprised how much I liked it.

Lynn...I used the bell pepper but I'm certain a cucumber would have been fine. How are you with serrano or jalapeno? We have a very productive serrano chile in the garden and it really added something!

Lynn, I originally made this with the bell pepper but sometimes it's difficult for me to find organic ones so I started substituting an extra cucumber. Honestly, there isn't much of a different between the two methods.

For what felt like forever, I've been stuck in Oklahoma, helping out family, and fell behind on my blog reading. I love the new look of your blog...especially the header! I can't wait to catch up and see what you've been making.

Your version of gazpacho looks great! I recently made a batch to which I added half an avocado, and the results were creamy-- kind of like a raw cream of tomato soup! Oh, I love homegrown produce-- it makes summer worth the heat and humidity!

Crystal - great to see you! I know how those distractions can be (mine was getting two kids through high school). We really loved the gazpacho - so glad I found it (and that you made it). So funny that your recent post is cauliflower because that's my next one - we got a beautiful one in our CSA.

Danielle - the idea of blending the avocado in the soup sounds amazing. I'll have to try that. I have to make a point of keeping plenty of avocados around here because they are one my daughter's favorite snacks. I want to plant a tree (my daughter said there are avocado trees all over her campus in So Cal)