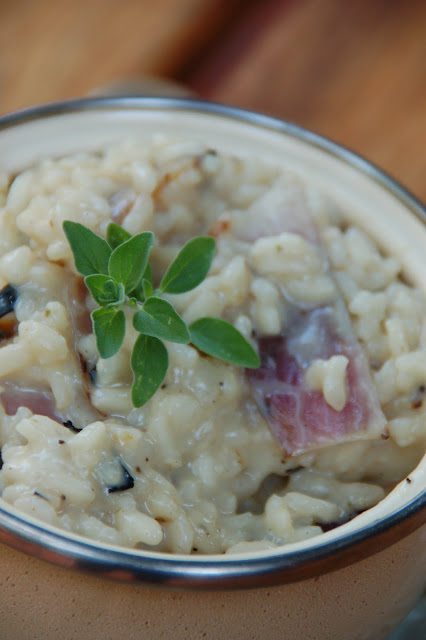 Monday nights have become "go through the fridge and use everything up" night because I get my CSA share on Tuesdays and I want to make sure I haven't overlooked anything.  I came across two open packages of arborio rice in the pantry - they each had a cup of rice left so that was the start.  I had a few onions - two red and one white; no parmesan but a container of blue cheese, no broth on hand but a couple of vegan bouillon cubes.  Hmmm...the weather has cooled considerably so the notion of standing at the stove and stirring risotto didn't sound so bad.  And the result was really good...

Heat up gas grill - about a medium flame.  Peel onions and cut into quarters - toss with some olive oil and salt.  Place them on a grill pan and close the lid.  While those are cooking heat up some olive oil (I just used my sprayer) in a large saute pan on medium heat and toss the arborio rice, stir until every grain is shiny and covered with oil (you can do a more traditional part butter, part olive oil but this works just as well).  Add the white wine and cook until the liquid is absorbed.  Add the vegetable broth one cup at a time, stirring each addition until the liquid is absorbed.  Don't forget to check on your onions!  I stirred mine occasionally until they were soft and the quarters had fallen apart.  Some pieces get a little darker than others but that's fine. 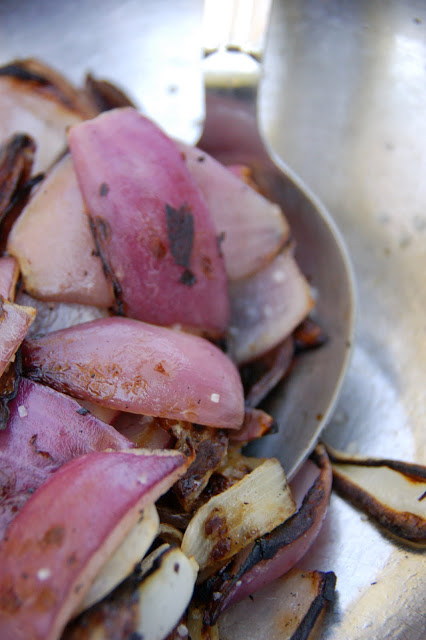 Continue adding broth until the rice is still a bit firm - al dente - but not chalky inside.  If you run out of broth you can use some water to finish it.  Once the rice is cooked, stir in the blue cheese and combine until melted, stir in the onion and season to taste with sea salt and freshly ground pepper.


We had a lovely insalata caprese with this - using tomatoes and basil from the garden.  I did a panicked picking of the tomatoes because yesterday our nectarine tree was stripped clean of fruit - presumably by squirrels - I was worried the tomatoes would be next!  It's not a large tree so it's completely plausible.  We have deer in the area but they don't come into the backyard (we have a very tall fence) and it's not a tree that is visible to anyone so I doubt a hungry (and greedy) person wandered into our yard.  I'm always scolding the dogs for barking at the squirrels but I've changed my tune today - go get 'em! (don't worry - they never catch them - in fact the squirrels get up high in the trees and just tease the dogs incessantly).
Posted by Guinnah at 5:08 PM