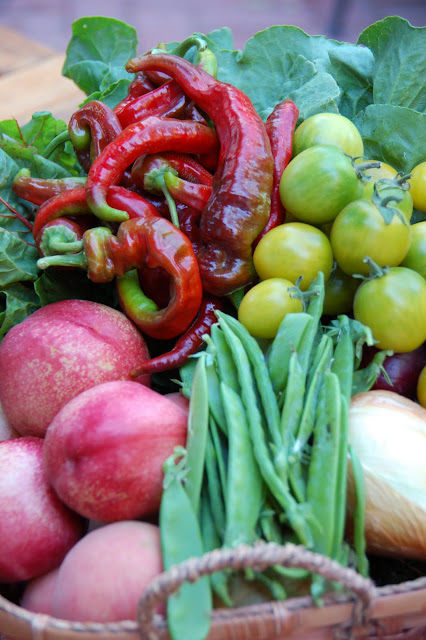 Such a colorful haul yesterday!  I picked up at the tail-end of the appointed time - about two hours later than I usually go and was happy to find that there was still plenty for us latecomers.  This week we came home with:


basket of tomatoes
sweet peppers (had choice of eggplant or peppers))
1 head of romaine lettuce
1 bunch chard
onions
nectarines
peaches
snow peas
1 bunch summer savory
ratatouille focaccia bread
I thought my family showed considerable restraint in not tearing into this beautiful bread the minute I walked in the door: 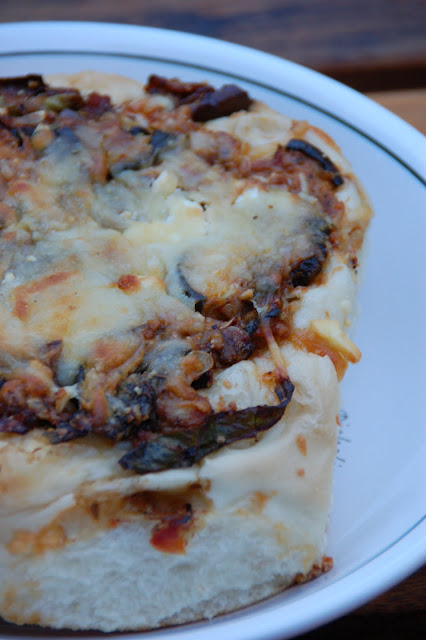 I saved this for tonight since we already had so many leftovers from the weekend (including some mini pizzas which I topped with the chard like I did a few weeks ago - yum!).
Things are really coming along in our garden - I get tomatoes pretty much every day now and will soon be picking cucumbers. In the ongoing guinnah v. squirrel battle  I bought a spray product that is supposed to deter the annoying critters.  Of course I don't want to kill the squirrels or even harm them  (or my dogs) so I bought a product that is supposed to deter based on smell and taste.   Sounds good in theory only this stuff smells so good - rosemary, peppermint - they are going to think they are in a spa.  Squirrel pedi - I don't think so!
Posted by Guinnah at 3:21 PM

Hey, what are you gonna do with those peppers - are they hot??
The foccacia looks amazing!

Good luck with the squirrels - do your dogs ever go after them? Mine is on constant squirrel patrol so they stay away (mostly)