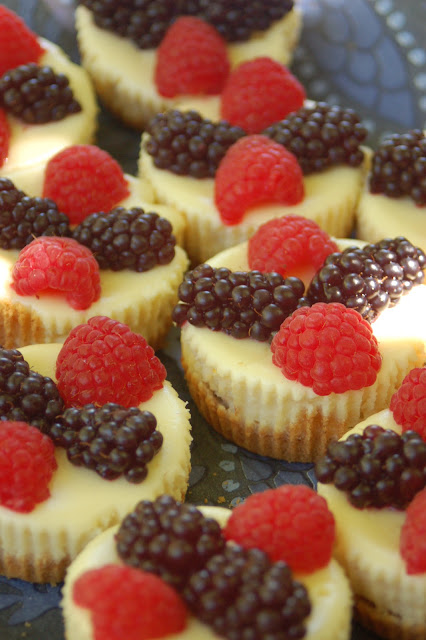 Over the weekend I had the privilege of cooking dinner for a friend of mine who is recovering from surgery.  A privilege because this family is a joy to cook for - they love everything!  And as the cook, an appreciative audience is so nice.  I must say that my own family is always appreciative - don't want to imply otherwise!

Which means that I have several things to blog but I'll start with dessert today.  Last year I posted about the buttermilk cheesecake tarts I made for my daughter's birthday.  Along with cooking for my friend this weekend, we were also invited somewhere for dinner.  With this recipe in mind,  I offered to bring dessert.  Last year when I made the tarts I had extra batter so I made mini cheesecakes by dropping a gingersnap cookie in the bottom of a cupcake liner and then putting in the batter.  I didn't pay close attention when I was baking and they definitely cracked and sunk but they tasted great.  I wanted to try those again so I put in a tiny bit more effort and was so happy with the results (in fact I was wishing I'd made all mini cheesecakes instead of the tarts).   I used regular size cupcake pans and liners and put a generous spoonful of the crumb mixture into the bottom and used my mojito muddler to tamp the crumbs down.

The only changes I made to the previously posted recipe is that I increased the amount of graham cracker crumbs (I used two of the three packages in the box)- I did not increase the amount of  butter for the crust.  So the crust was a little more crumbly but if I handled them carefully it wasn't a problem - even with the larger tarts.  They are a perfect size for when you just want a little something and would be great for a party - they are really quite simple!


Mini Berry Cheesecakes
printable recipe
1 cup butter, room temperature
2 packages graham crackers (about 3 cups crumbs)
1 cup sugar
3 8oz packages Neufchatel cream cheese
3/4 cup buttermilk
1 teaspoon vanilla
4 eggs
berries for garnish
Preheat oven to 350 degrees.  Melt 1/2 cup butter.  Add cracker crumbs, mix thoroughly.  Place cupcake liners in cupcake pan.  Spoon crumb mixture into bottom of each liner -a heaping tablespoon full.  Tamp down with the bottom of a skinny glass (I used a muddler)  Bake for 5 minutes, remove from oven and set aside.
Cream remaining butter and 1 cup sugar with cream cheese until smooth.  Add buttermilk and vanilla and beat until well mixed.  Add eggs and beat slowly until combined.  Do not overbeat.
Spoon batter into muffin liners - about ¼ cup of batter for each mini cheesecake.
Bake for 24 minutes.  Cool in the refrigerator until cool enough to handle and slightly firm then carefully remove the paper liners and chill until completely firm.  Top with berries that have been split in half - split side down.
Because I made some of this into tarts (six) and some into mini cheescakes (21) I’m not sure exactly how many minis this would make - probably close to three dozen.  It’s flexible - if you want to fill them a little more just bake them a bit longer.
Posted by Guinnah at 5:06 PM

Hester aka The Chef Doc said...

Ooh, fabulous, Guinnah! It's a pleasure to meet you! How funny that you made mini cheesecakes, too! Now, what is Neufchatel? I've seen it but have never used it before. Your recipe sounds really good, too. I'll have to try it out!

Hi Hester! I know, it's funny we both posted similar things :-) Neufchatel is the lower fat cream cheese - I got mine at Trader Joe's but I know that philly makes it too. Great to meet you too - I look forward to following you!