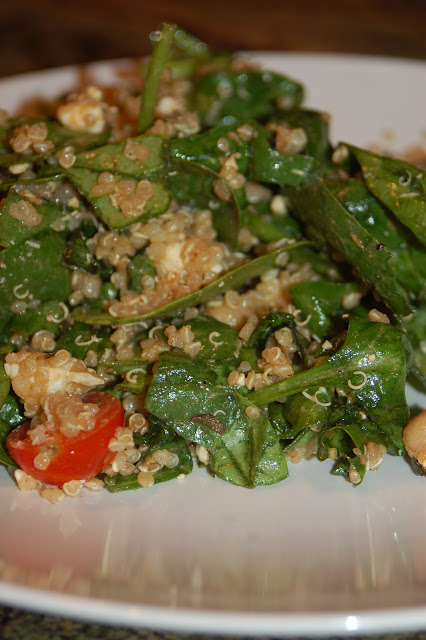 I'm just going to slip back in here...long time no see!

I went looking for some ideas for spinach salad the other night . We eat a LOT of spinach and I have many favorite combinations that we have over and over.  But I was kind of hoping for something a little different so I looked on epicurious and found this recipe.  As luck would have it I had pretty much everything it called for on hand (except cucumbers and it was just fine without them).

I'll admit I was a little hesitant once I made the dressing because that smoked paprika flavor was really strong and I just wasn't sure how that would blend with everything.  But it was delicious (and really, I don't think it would be worth making the dressing without the smoked paprika - regular paprika just wouldn't do the trick). We typically dress our salads with just balsamic vinegar and a spritz of oil so I don't like a lot of oil in my dressing. I ended up using a 50/50 mix instead of the 2:1 ratio the original recipe called for. We really loved this salad - I was getting thumbs up while we all ate.  In fact liked it so much it got me back on here to blog it!

Hey! Nice to see you here again! This looks really yummy, and I think I have everything on hand except the spinach. Will try it this week!

Thanks! Not sure the reason for such a long absence but you know how life gets! I hope you like it - we loved it!

Oh man, I LOVE garbanzos AND quinoa! I'm all over this.

I'm not big on cooking (big on eating though!) - but this recipe grabbed me.
w

Quinoa is really good in salad - I made a taboule with it once. Will definitely try this when I get more spinach!